Marek’s Disease in Chickens Is 100% Preventable 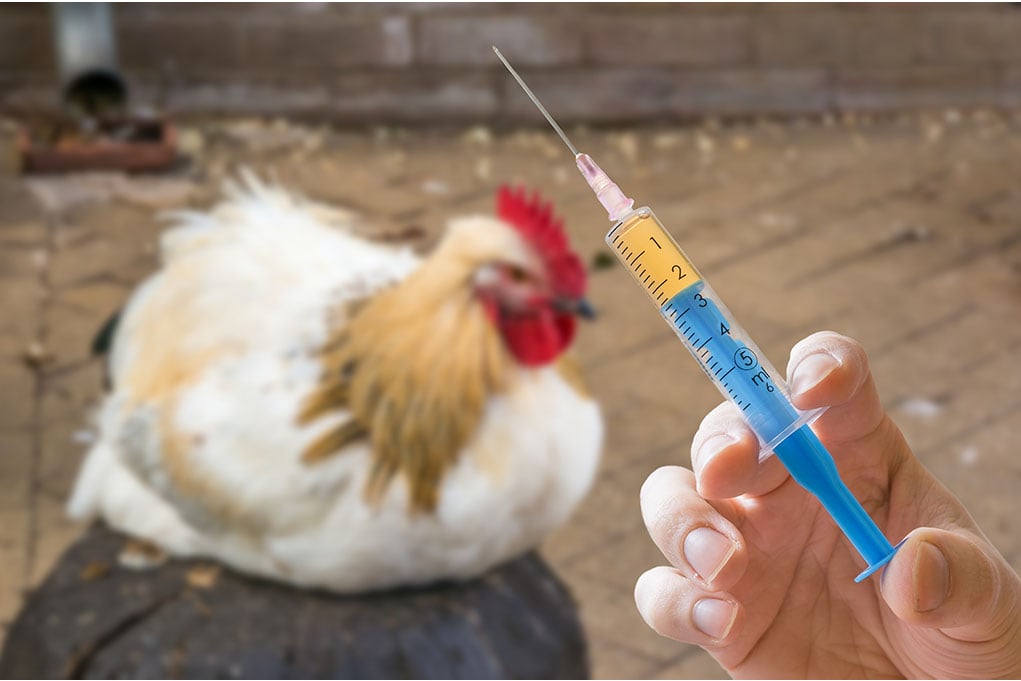 Now you may be searching on Google “merrick’s disease in chickens”, but you’ll be glad to know they are the same thing.

Are you worried about Marek’s disease in chickens?

Whether you’re raising chickens for eggs or meat, this is a disease you’ll want to be on the lookout for since it can decimate your flock. 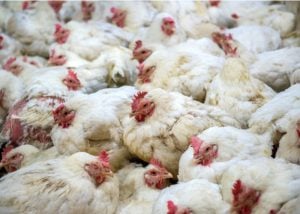 What is Marek’s Disease in Chickens?

By far, Marek’s disease is one of the most common poultry diseases out there.

Marek’s is one of the few diseases that you can find in small backyard flocks and commercial chicken houses.

It was first introduced in North America and Europe sometime in the 1980s to 1990s.

Marek’s disease is highly virulent and has multiple manifestations, including those that are neurological (brain and nervous system-related), visceral (an infection and tumors of the organs), and cutaneous (tumors on feather follicles).

The bad news about Marek’s disease is that it is not treatable once symptoms appear.

This disease can affect chickens of all sizes, ages, and breeds. It does not affect humans or any other animals.

How many birds get sick in your backyard flock depends on which strain the virus is present, since some songs are more virulent than others, along with the breed of bird.

Leghorn chickens and other light egg-laying breeds tend to be more vulnerable to this disease than meat birds.

Silkies, especially, are exceptionally prone to Marek’s. That’s not to say that birds of other breeds can’t get the disease.

However, raising one of these types of chickens makes you more likely to encounter the condition in your flock.

Marek’s disease can cause an illness and an ultimate mortality rate of up to 50%. The first onset of symptoms generally appears at around six to thirty weeks of age, but it can occur in older birds, too.

Once your chicken has been infected with the disease they become more susceptible to the following syndromes: 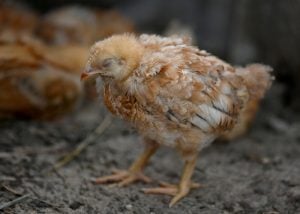 If a chicken becomes infected, that chicken will remain infected for life (as is the case with herpes viruses in people).

Not all infected birds will show symptoms – again, this disease shares in common with the herpes variants that affect people.

Chickens become infected with the disease by inhaling dander from an infected chicken. In a purified form, the virus can be treated and destroyed.

But it can live for many years in the chicken dander.

Because of this, once an outbreak of Marek’s disease has appeared in a coop, they will contaminate the environment, and the disease will linger for months to years.

That’s true even if the chickens have long since left the building.

Infected birds, as we mentioned earlier, remain infected for life. Because of this, they will spread the disease as long as they are alive.

Unvaccinated birds, especially young chicks, are most susceptible when brought into a flock of infected birds.

Unfortunately, this disease is highly contagious.

Even if you can quarantine new chickens away from the old ones, you can carry the virus to the quarantined birds on your hands, shoes, clothing, skin, and hair.

If a hen infected with the disease lays an egg, the resulting chick will not be infected unless it contracts the virus in other ways (such as by your hands or from the mother hen later, in the coop).

Marek’s Disease Chicken Symptoms: What Are They?

The classic presentation of the disease causes tumors and inflammation to appear in the chicken’s spinal column, brain, and nerves.

It can even lead to head tremors or paralysis in the wings and legs.

Other common symptoms of Markets are related to the eyes. Your chickens might have gray irises, bloodshot eyes, irregular pupils, or vision impairment.

The crop of your chicken may be likely to collapse, too. Pale combs and wattles are also common.

The skin around the feather follicles of your chicken might also be raised and roughened.

Because it causes such severe paralysis, Marek’s disease almost always kills a bird due to starvation or trampling.

Even the development of painful sores can be what kills a chicken since they can quickly become infected.

Most birds will never make a full recovery from Marek’s. Not only that, but infected birds are also more likely to contract other diseases, including bacterial or parasitic.

In addition to the symptoms described above, Marek’s disease can also cause tumors in the internal organs, the skin, and the eyes.

An infected bird will lose weight and become severely emaciated.

If you suspect Marek’s disease in your flock, you must call a vet out to test as many individuals as possible.

Most diagnostic animal labs can test for the condition based on symptoms and biopsy the tissues or a complete autopsy.

Upon inspection, a chicken that is affected with Marek’s disease will generally have post-mortem lesions in the kidney, spleen, liver, lungs, heart, gonads, or skeletal muscles. 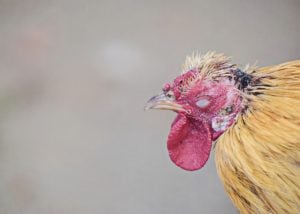 There are a few ways you can prevent Marek’s disease in your flock.

As mentioned earlier, prevention is the only surefire way to stop this disease from ravaging your community since there are few effective treatment options.

The Marek vaccination is the most critical thing you can do to prevent Marek’s. It has to be administered before chicks are exposed to the virus and after the vaccine, it needs up to a week to become fully effective.

If you’re introducing new chicks to the flock, you must keep them separate for at least one week.

Most hatcheries offer the Marek’s vaccination for day-old chicks, but since they’ll be arriving at you at a maximum of two or three days old, you’ll need to keep them away from other birds in the meantime.

The best way to vaccinate your flock is to have the hatchery do this. However, if you’re vaccinating at home, you need to be very specific about how you go about this.

Only a few companies sell vials of Marek’s vaccine to individual owners – and most vials contain as many as 5000 doses!

It will usually arrive refrigerated with cold packs since it can’t get warm while in storage. There are also frozen versions available.

Follow the label instructions to a T, making sure you thaw it within the proper timeline and at the right temperature.

You must use the vaccine within no more than two hours after reconstitution.

Injections can be complicated with squirmy little chicks, so it might be helpful to recruit someone to hold while you inject.

Some people believe that not vaccinating birds amidst an outbreak of Marek’s is the way to go because the chickens with natural resistance to the disease will survive and pass on their genetics to future generations.

While this is a noble thought, the reality is that genetic disease resistance takes many decades to develop. After All, this is why there aren’t any hatcheries that sell Marek’s-resistant breeds.

Because Marek’s is spread so quickly to chickens from caregivers, it’s a good idea to switch up who cares for which groups of chickens if you’re dealing with Marek’s in your flock.

If this isn’t possible, you should take care of the uninfected birds before moving onto the others. Then, change your clothes and shower if you must go back and forth between groups.

Make sure the brooder and coop are kept as clean as possible. If you have a Marek infection, you need to clear out all dander and debris, even if you’re introducing vaccinated birds after a long period.

It’s unclear exactly how long the Marek’s virus can linger, but experts agree that it’s a very long time – so ideally, you should introduce new birds to a brand-new, clean area.

There is a common misconception out there that housing chickens and turkeys together will prevent Marek’s disease as the chickens will be exposed to turkey herpesvirus, allowing them to confer some natural immunity,

That’s not the case. This method does not work and it can actually backfire, since the turkeys will then be exposed to other chicken diseases like blackhead and mycoplasma. 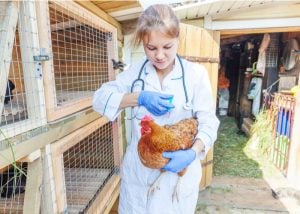 Why Veterinary Assistance is Important

If you suspect Marek’s disease in your flock, you must contact a veterinarian right away.

You might be thinking, “what’s the point? The chicken is going to die anyway.”

However, it’s essential that you get a professional diagnosis rather than assume because several diseases look similar to Marek’s.

For example, if your chickens have a problem with lice, mites, or worms, they’ll exhibit symptoms that may mimic those of Marek’s.

These include droopiness and lethargy, discolored wattles, reduced appetite, and more.

Egg binding can also cause symptoms that look like total paralysis. This condition is when a hen is unable to lay her eggs.

While it might seem like paralysis due to Marek’s, it’s actually due to something far more benign (and treatable).

Even vitamin and mineral deficiencies can mimic the effects of Marek’s disease. A lack of vitamin B can give your chickens paralysis and lead to other issues.

Making sure your chickens are getting the proper nutrients and vitamins from their feed is an excellent way to prevent this – but again, always consult a vet to test for Marek’s if you think something strange is going on. 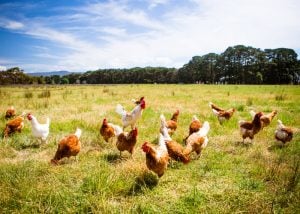 Now that we’ve shown you what Marek’s disease in chickens can do and how to prevent it hopefully it won’t happen to you.

Sadly, once Marek’s disease has arrived on your farm, there’s not much you can do. There is no treatment or cure for this disease.

Your flock might be infected long before you ever know it.  Your chicken can come in contact with Marek’s before you know it.

Remember, a chicken can have this virus without showing any symptoms – so don’t assume you’re safe if you haven’t vaccinated your flock.

If you start seeing signs, isolate birds who are seemingly affected but exercise caution when working with all of the members of your community.

Never introduce new birds to a flock, under any circumstances, if you are experiencing an outbreak of Marek’s disease or symptoms that might indicate this kind of disease.

Even if you think you are safe, don’t introduce birds to an unvaccinated flock if symptoms are present. It’s not worth the risk!

It can take quite some time for an infected bird to show symptoms.

Affected chickens often live everyday lives until the disease progresses. It is when tumors develop, and paralysis takes hold that you will begin to notice a decline in the quality of life of your birds.

Because of this, you may find that it’s most practical and humane to euthanize the chicken at this point.

While this can be a difficult decision to make, if your vet has made a  positive diagnosis of Marek’s, they can give you the best advice on moving forward.

Ultimately, you will need to do the right thing for your sick bird.

Only purchase chicks that are vaccinated. Be vigilant for signs of this and other common chicken diseases in your poultry house!

READ NEXT: All You Need To Know About Marek’s Disease 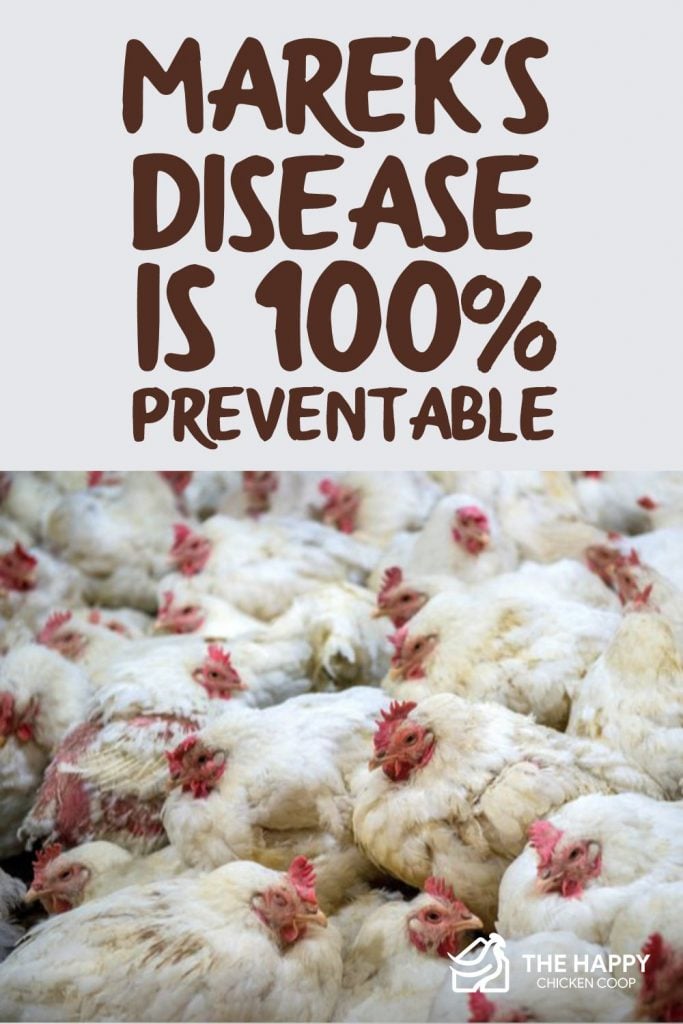