The Easiest Way to Catch a Chicken 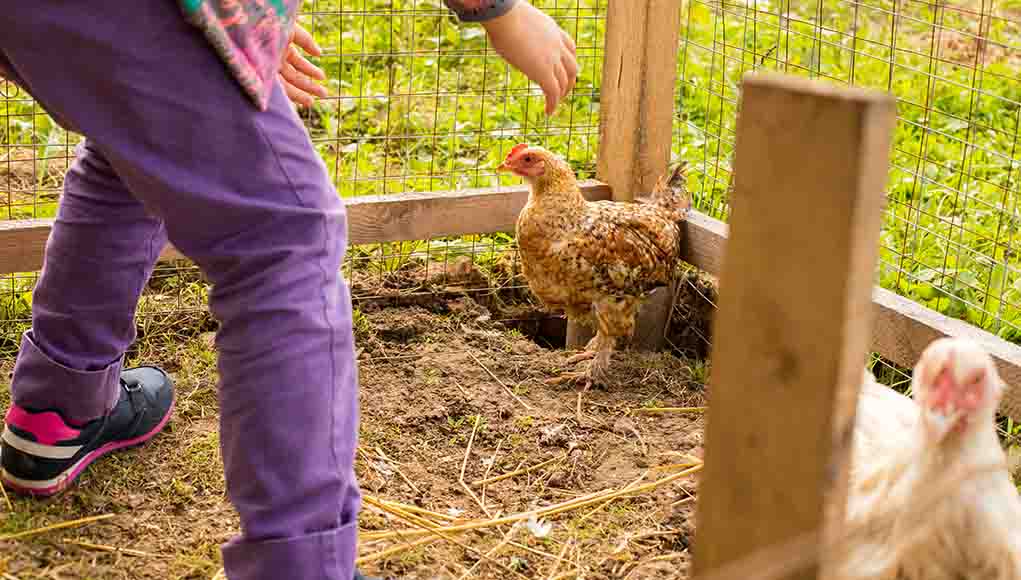 Catch a chicken, sounds simple, doesn’t it? IT WAS SIMPLE when I first started with chickens and had a handful of ladies.

They all knew and trusted me – so I could easily scoop them up and do whatever was needed.

When I was done, I would plop them down and give them a treat so they would always trust me and come to me.

This plan of attack worked well for most of the ladies, but there were always a couple that would give me a run for my money, literally.

Method 1: Catching Chickens with a Pole

The average human can run at 8.6 mph – chickens can run at 9 mph. Bear this in mind for the following few paragraphs.

This item is a long pole – usually four feet or so in length, with a hook on one end. The theory is that you hook it around the chickens’ foot and catch hold of her while she is ‘hobbled.’

Have you ever used one? I have, and my hat goes off to those who make it look easy.
I must have looked like a complete lunatic running around trying to snag a chicken. Fortunately, there was no one around watching at the time!

Of course, once the chickens have seen this item in your hand and have stopped snickering behind their wings, none of them will let you approach within ten yards of them – who said chickens aren’t smart?

They remember the previous incident and have learned to avoid that pole!

Method 2: Catching with a Fishing Net

Ok – this one is on a par with the catching pole. Once the chickens have seen it in use, they will vanish.

The net does work quite well if you can ‘corral’ them in the run or other contained area.

The captured chicken will let you know her displeasure at being caught in such a device! I think you can expect a couple of pecks from her, more from terror than anything else.

Once you have her in the net, an old blanket to cover her will calm her somewhat – but she won’t forget (or forgive) this treachery.

Some breeders use a net to catch the birds that they want from the pens, and so it becomes a traumatic experience for the bird – an experience they won’t forget and one that will induce panic in the birds.

Some folks use it to capture those hens who roost in trees at night. The trick is to catch them on the way up the tree rather than climb the tree with a net in hand.

Otherwise, the result might take some explanation in the local Emergency Room!

A much easier way to snag a hen! You can set up the nest boxes to spring shut once your hen is inside.

The apparent drawback is will you catch the hen you want? If you are trying to see them all for dusting or other such chores.

If, however, you want one of the older ladies that doesn’t lay frequently (if at all), this method is not going to be helpful to you.

You should use this method relatively infrequently – you don’t want them associating the nest box with unpleasantness – or they will start laying those cackle berries elsewhere.

This is by far my favorite way of treating or assessing hens. It is a low-key, non-traumatic way, and you don’t have to be a contortionist or Olympic athlete to get your bird.

You can quickly assess or treat several birds each night without causing too much grumbling and discontent in the coop.

Your tool of choice is a small flashlight that clips to your cap visor or a headlamp.

Once they are all settled, and you know where the ‘chosen hen’ is, re-enter the coop trying to keep the flashlight beam mainly on the ground – you don’t want to wake everybody up!

When you approach the hen, make small, slow, deliberate movements so as not to alert her to your dishonorable intentions.

As you are hovering over her, place both hands over her wings so she can’t flap around and gently remove her from the perch.

Once outside the coop, you can do whatever is necessary for her and return her to her spot on the perch. Hopefully, she will think it was just a bad dream!

Boxing Method of Catching a Chicken

No, I don’t mean with fisticuffs. I mean with a simple cardboard box.

This method works best if you are trying to catch a chicken in a coop that is too large for you to pick up quickly or too aggressive to handle.

I use this when moving an aggressive rooster to a new location.
Here’s how it works:

The darkness of the box calms the bird, and the box protects you from spurring or pecking.

Because some of us have small hands, it can be nearly impossible to safely handle a giant rooster. This method is a safe and gentle way to move your chicken from one location to another.

Catching a Chicken on The Escape

Every once in a while, a hen will decide to go ‘walkabout’ for the day. This sends their keepers’ into a panicked flurry – especially if they are a rare breed or simply precious to you.

If the bird has been in the housing/coop for a couple of weeks at least, the chances are good that she will return by sundown if she’s a bright hen.

If you have the time and patience and have worked on building a trusting relationship with your birds, you can try sitting in a chair near the coop. Sprinkle some scratch or treats on the ground to entice her.

Sometimes this will work and sometimes not, but it’s worth trying.

Remember to have a good book with you – hens are never in a hurry!
The next option is a bird trap crate.

The crate is simply an open mesh cage with scratches or treats left on the floor. You can fix it so that you are a good way from it, but the minute she goes in, you pull a string that shuts the door on her.

Again, you can also use the fishing net or pole methods mentioned above.

If you have a small flock that you have built a trusting relationship with, picking them up individually is by far the best way to go – for the hen and you.

They will come to look on these ‘checks’ as a time to sit in your lap and enjoy some extra attention and perhaps a treat.

If you are going to be doing something a bit unpleasant (worming medicine, dusting, etc.), you might choose to do it in a separate room away from the rest of the flock so that the rest of the birds don’t get unsettled.

As you know, there will always be one hen who is convinced you will murder her and will run squawking around the barnyard if you come near her! We will deal with her later…

There are several methods we have reviewed here. Some folks swear by the chicken pole, yet others with the net.

I prefer the roosting time because it is less traumatic for them and you. The whole idea of catching the chicken is usually to check on its’ well-being or do something for their well-being, so stressing it out by chasing it with a net or a pole defeats the object and can be exhausting for you and the birds.

In general, hens are the happiest when they are in comfortable and predictable circumstances.
Remember, though, don’t start yelling, running around, or making a considerable fuss when they do escape.

This only will make the situation. The hen will pick up on your anxiety, making her unsettled and reluctant to come to you.

Try to remain calm and unhurried. She will likely come home soon, especially if there are treats!
Let us know in the comments section below your favorite method to catch a hen. 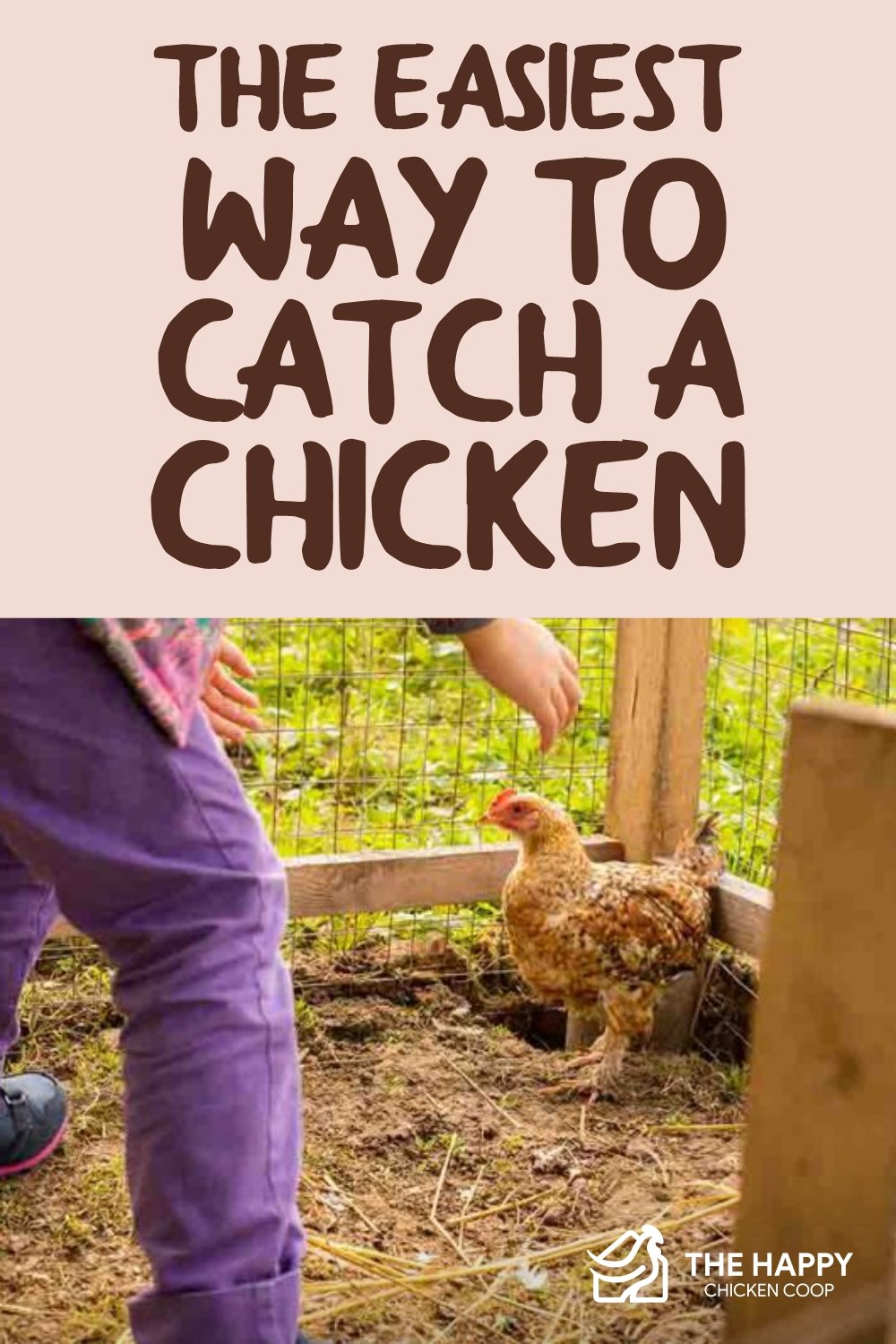 25 thoughts on “The Easiest Way to Catch a Chicken”