You are here: Home / Managing Your Flock / How To Prepare For Chicks 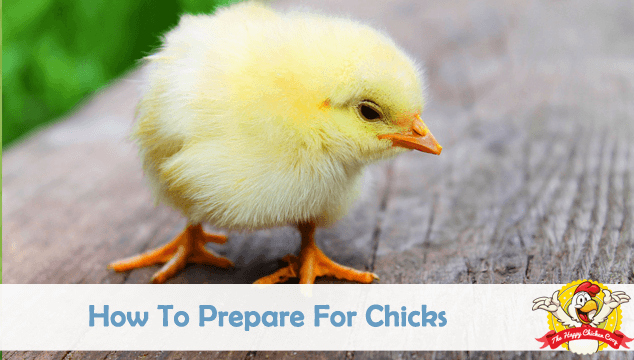 If it’s your first time or umpteenth time with baby chicks, it’s always an exciting time!

While you are waiting for them to hatch or come by mail, the anticipation builds up to the day of arrival.

However, there are several things you need to prepare before your chicks arrive.

We are going to spend a little time here helping you prepare with our tips and tricks for those new hatchlings!

So now, we will go through each item in detail and get you up to scratch.

The first thing you need to prepare is a brooder.

What is a brooder?

The simplest form of a brooder would be a cardboard box. It needs to keep chicks in and predators out.

Ideally the corners will be rounded so the chicks can’t all pile into one corner and squash the little guy at the bottom. This can be easily done with some extra cardboard and duct tape. Make sure there aren’t any tiny holes that chicks can sneak into or escape.

If you are a creative soul, brooders can be made out of many things: an old chest of drawers, bathtub, old crib – you get the idea! 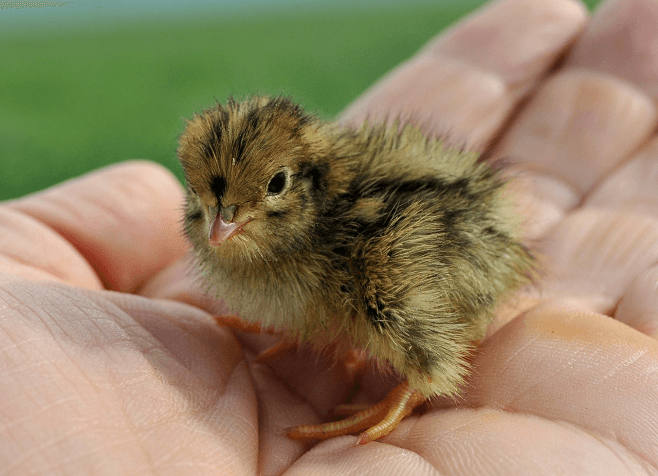 There should be enough space for them to explore and room for the food and water to be away from the heat.

As an example a fifty gallon plastic tote bin will accommodate around six to eight chicks until they are around four weeks, a little longer if they are bantams.

If you do use a plastic bin or something else that has a slick or slippery surface, you should lay down some burlap, paper towels or an old towel so that the chicks have something to grip with their feet. If they are unable to grip or stand they can get a condition called ‘spraddle leg’ where the legs slide apart and are unable to hold up the body.

It will also need good ventilation to keep the air free of moisture and allow good exchange of air.

Safety of your chicks depends on the security of the brooder.

If you are putting the brooder outside in the garage/outhouse, it will need to be sturdier than cardboard. Predators such as weasels, even rats will tear a cardboard box apart. A wooden or metal box with a secure locking lid would be preferable.

Some companies provide all you need for a brooder kit including drinkers and feeder, but if you aren’t going to be using this on a regular basis – save your money and improvise a little!

By far the most used type of bedding for chicks are pine shavings. They are absorbent and smell nice. There are several different types of bedding you can use though – here are the top contenders.

Pine shavings – as noted they smell good and are absorbent. They are also readily available at most feed stores and they are cheap.

Shredded newspaper – a great recycling project! I have used it but found that it is not readily absorbent for the moisture created.

Peat moss – some folks use this since it can simply be turned into the garden after use. It is absorbent and soft for the chicks to walk on.

Chopped straw – is not ideal. When the chicks are very small it’s a bit difficult for them to navigate through. You can certainly change to chopped straw as they get older.

Sand – many people swear by using sand. It’s easy to sift the poop out and absorbs the water. My only concern would be does it get too hot?

Pine nuggets – aka wood pelleted cat litter! This works well, but can be expensive in the long run.

The chicks cannot self-regulate their temperature until they ‘feather out’ at around twelve weeks. Until then they need additional heat to keep them warm. 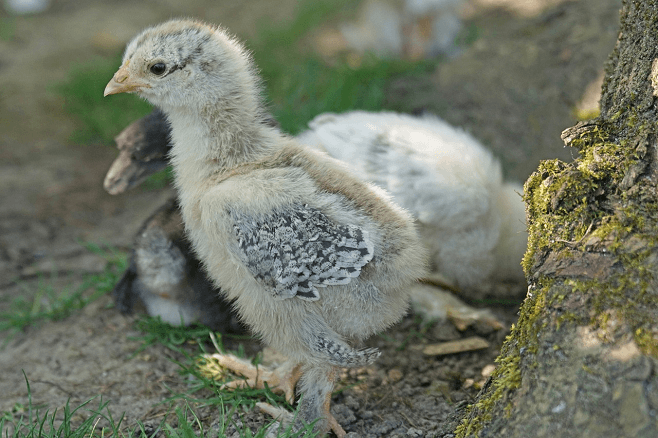 The most used source of heat is a heat lamp.

There are several different bulb types out there, the most commonly used is an infra-red heat lamp.

The red light emitted by these bulbs helps to deter chicks from picking at each other –a nasty little habit of chickens world-wide. They are a bit more expensive than conventional heat lamps, but they do last longer.

Ceramic bulbs can also be used, but unless you plan to be using your brooder several times each year, I would stick with the infra-red bulb.

TIP: Some ceramic heat bulbs have a Teflon coating which emit deadly fumes, check before you buy!

This is extremely important – don’t skip on securing your lamp! I strongly urge you to buy a fitting with a rigid guard over the bulb and one that can easily but securely be attached.

Using a lamp that is a ‘clamp-on’ style is ok, but you need to ensure that it cannot fall onto bedding by double or triple securing the unit. The heat put out by these bulbs can start a fire in less than two minutes!

As an alternative to a heat lamp, there is a fairly new innovation that’s now available to backyard flock keepers called a heat plate.

It is an adjustable height plate that stays warm on the underside. The chicks go underneath to keep warm and venture out to eat, drink and explore. These plates are much safer than the heat lamps since they are stable and do not generate nearly so much heat.

The cost of a heat plate is comparable to buying the rigid lamp and bulb and is much safer, in my opinion. I only use a heat plate now and have been very happy with the ease of set-up and use. The chicks like it too!

Just Remember: If you live in an area that has frequent electric outages, be prepared to improvise their heat source. A hot water bottle can be used, a heat pack or similar – be creative!

There is a special formula of feed for every age of chicken. Your chicks are going to need ‘chick starter’ for their first six to eight weeks. It is sold as crumbles which is easier for chicks to eat.

Now you have to choose between medicated and non-medicated feed.

Medicated feed has a coccidiostat (usually amprolium) added to the mix. If you are going to be adding your chicks to an existing flock, medicated may be a good idea. Although coccidia live in the chickens gut, it can cause disease and death in those with a low or no immunity. 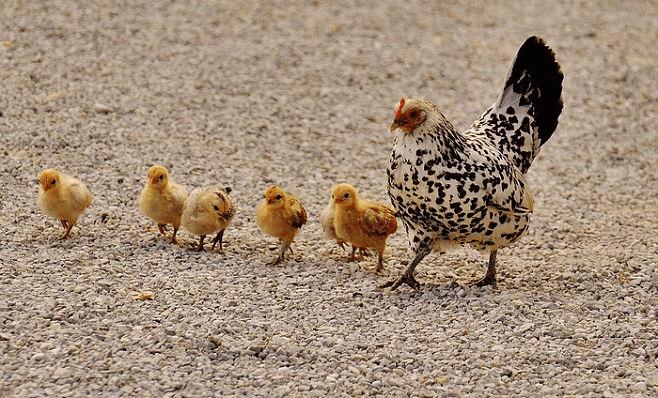 Tip: Don’t use medicated feed if your chick has received a vaccination for coccidiosis.

Chick starter is formulated to give eighteen to twenty per cent protein, six per cent of fiber and two and a half percent of fat. It’s also chock full of vitamins, minerals, pre- and probiotics.

At around eight weeks, you can switch them up to ‘starter grower’. This formulation has sixteen to eighteen per cent of protein with fiber and fat being unchanged. Vitamins, minerals, pre- and probiotics are still present in this feed.

Mixing chicken ration is a science. The feed companies have fully trained staff to formulate the different types of feed. Unless you have good knowledge of chicken health, I do not recommend you try to mix your own.

It is vital that chicks receive the appropriate nutrition so they can develop fully. A lack of certain vitamins or minerals can lead to many problems further down the road such as infertility, neurological defects and stunted growth to name a few.

Treats should be given sparingly for the first few weeks.

I don’t start giving them treats until several weeks old, but I do dig up dandelions with a bit of grass and dirt attached so they can be gently exposed to germs. They will need the grit as a supplement if you do this.

You can buy small bags of chick grit in the feed stores. The chicks don’t really need it unless you are giving them treats.

You may think this is obvious – but the ‘clean’ can present a problem.

Chicks are constantly scratching their litter, so a lot of litter ends up in their drinker – they are also not fussy about where they poop.

You will be changing their water at least three or four times a day, so if you have to buy a drinker – get two. They are inexpensive and you can have one ‘ready to go’.

For the first few days I use an electrolyte solution in their water. I mix up a gallon at a time and fill the drinkers as necessary. You could also use a sugar solution for the first couple of days if you prefer (one tablespoon/quart).

Importantly, for the first couple of weeks I place glass marbles in the drinker tray so they can’t drown themselves.

If you have received your chicks through the mail, you will need to dip their beaks in the water so that they know where the water is in their quarters. Do not put the water directly under the heat – they will not drink warm/hot water. 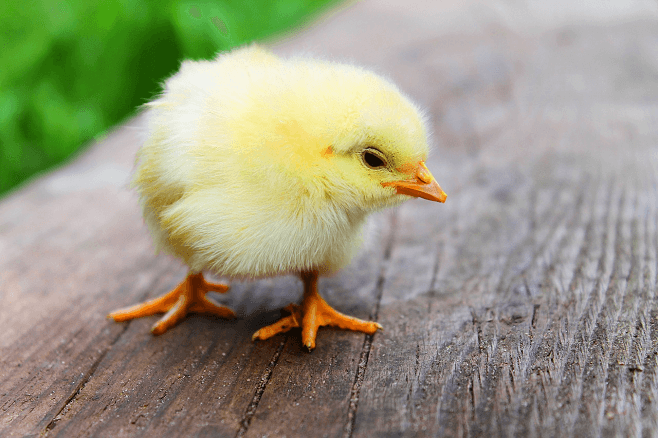 Once you have everything set up and your chicks have arrived, the work begins!

We have already noted that they are messy and will need their drinkers and feeders cleaned at least twice per day.

The litter needs to be kept clean and dry. The area around the drinker is likely to get very soggy, you can try elevating the drinker on a block of wood to prevent this.

Damp, warm litter is a ‘holiday resort’ for germs to grow in and the chicks will pick at the litter as a foraging activity. Obviously you cannot keep the litter dry at all times, but try to change out the damp patches as you notice them.

For the first few days you will need to inspect the rear end of the chicks carefully to avoid ‘pasty butt’.

We have written about this before, but basically the poop dries around the cloaca sealing it shut. If the chick cannot poop it will die.

It’s your job as “Mama” to gently remove any crusting so the orifice is open. This is usually caused by a brooder being a bit too warm, adjust the heat and observe your chicks. A dab of olive oil or other natural oil on the cloaca will help to keep the poop from sticking.

Inspection time can also become bonding time. Put some crumbles in your palm and place your hand on the floor. It will take perhaps a couple of days before they are brave enough, but soon they will be walking on your hand and allowing you to pick them up.

New chicks are fun and cute, but caring for them does entail some housekeeping duties. The cleaning of the brooder area need takes no more than ten minutes each time – so easily less than an hour a day.

If your brooder is enclosed, the only time the chicks will see you is when your face appears over the lid. Make sure to whistle or sing/talk when you are approaching so they are not quite so startled to see you.

This is the best time to bond with your birds, the more time you spend with them, the tamer they will be – you can even teach them tricks when they are old enough!

We hope this article has given you some tips on caring for your chicks.

We love hearing from you, so let us know in the comments below how you prepare for chicks. 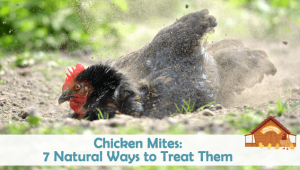 7 Natural Ways to Treat Chicken Mites and Stop Them Returning

Is It Safe To Feed My Chickens Table Scraps?