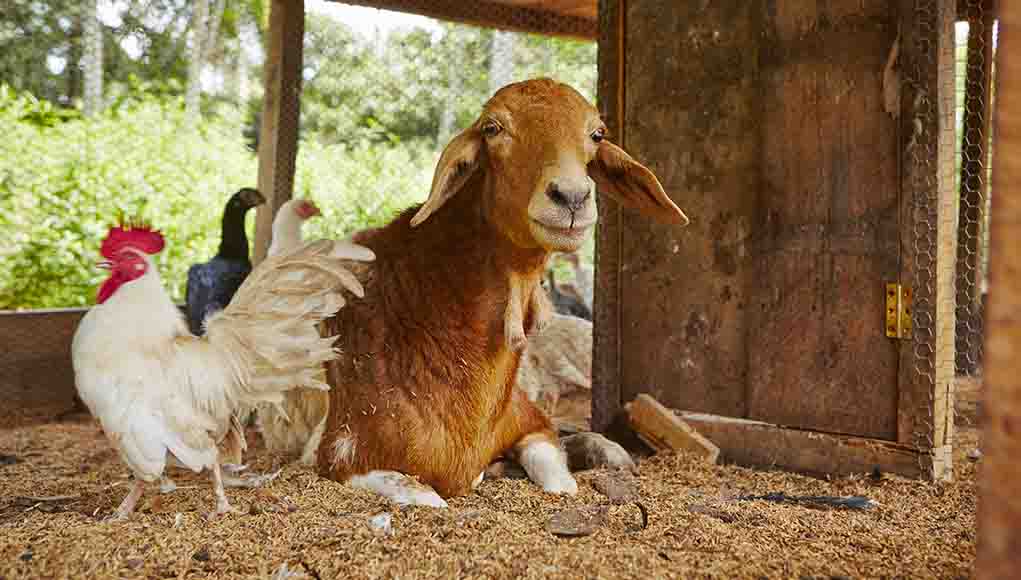 When considering goats vs. chickens for your farm, you may feel a bit overwhelmed by the benefits of both.

Because they both have a lot to offer you and your family!

Chickens are considered the gateway to farming animals, but goats aren’t too far behind.

Both critters are like chips. You can’t have just one. And usually, they’re so addictive that your farm will grow and thrive beautifully with each addition.

You can’t go wrong with either one. Both of these animals are abundant in their gifts, but if you have to choose one or the other, this guide will help you make a final decision.

One of the most significant benefits of raising chickens instead of goats is their fresh farm eggs. If you love the taste of fresh eggs, or if you go gaga over a basket of rainbow-colored eggs, your decision has been made.

You’re going to need some hens.

As a bonus, chickens begin laying eggs as early as 4 months! There aren’t many farm animals that can produce that fast!

While goats do not provide eggs, they have a myriad of other goodies to offer up that chickens don’t.

So, before you start ordering your chick, let’s examine everything to know you’ve made the right decision when choosing chickens vs. goats.

While you clearly can’t get eggs from goats, you cannot get milk from chickens. Goat milk that is.

Goat milk is creamy, delicious, and boasts many health benefits that are not present in cow’s milk.

You can use it in cereals, baking, and of course, for drinking…just like a cow milk can. Plus, goat milk is terrific for cheesemaking, soapmaking, and other amazing homemade bath and body products.

Think of a goat as a mini dairy cow. The difference is, that they don’t eat as much or need as much space! 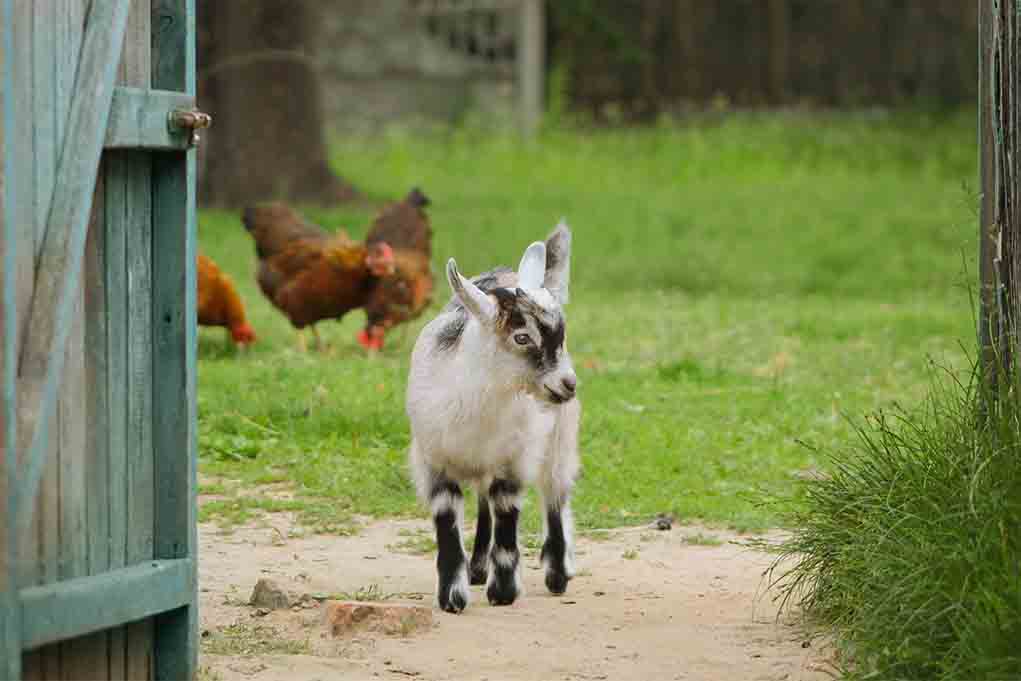 ​​Like their eggs, you can harvest chickens for their meat as early as 7-9 weeks of age, depending on the breed of chicken.

If you’re keen on controlling where your poultry meat comes from and how it’s raised, you’ll love raising your broilers.

While there are many dual-purpose breeds of chickens available (for both meat and egg production), you can also choose to raise one over the other. Broilers, for example, grow quickly!

On the other hand, goat meat is also something that can sustain a family quite well, and if you decide to raise Boer goats, for example, you’re looking at a quick turnaround as well. They’re the broiler chicken of the goat world.

Goat meat and chicken meat both have their benefits. What’s important to note, is that both animals can provide meat for you and your family.

Which type you chose is a matter of personal preference.

Goats vs. Chickens and Companionship

But when it comes down to it, goats are also excellent pets that can provide companionship.

In the category of companionship, your decision will come down to your personal preference.

For example, I had a pet chicken that lived for 11 years before succumbing to a predator attack.

She would follow me around the yard, didn’t mind being picked up, and was entertaining and beautiful.

But I also have a goat that I lovingly refer to as my therapy goat. She’s kind, gentle, and loves attention.

She calls gently to me in the morning, and spending time with her is extremely calming. So, when it comes down to it, my specific goat wins in the battle of the buddy animal.

That’s not to say someone can’t have the same exchange with a chicken. It truly comes down to your preference and the specific animal. 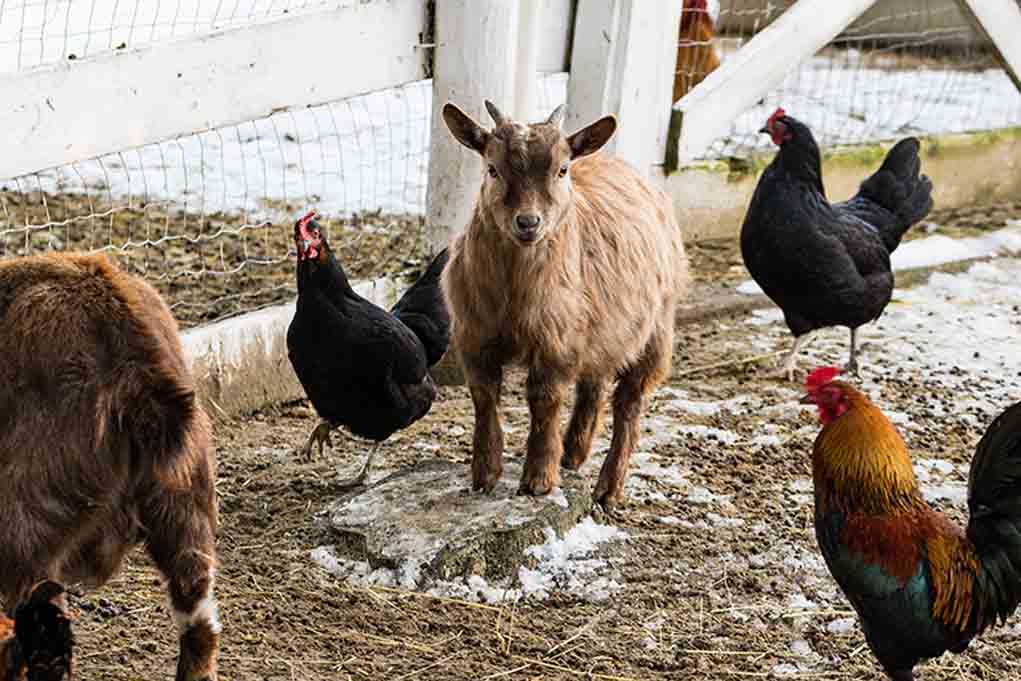 Chickens and goats are both extraordinary to observe. And who hasn’t seen a viral goat video featuring a springy little kid or an ornery goat scream?

Chickens are just as entertaining. I often tell my husband I could watch chickens all day. They’re humorous, unpredictable, dinosaur-like critters who scratch, peck, and complain on and off all day long.

Witnessing a hen with a unique find in her beak running ahead (and away) from the rest of the flock is hilarious. Those fluffy butts can move!

On the other hand, goats hopping about, battling out their pecking orders, and playing on spools and board are just as fun to behold.

Both animals are a feast for the eyes and the soul.

Noise Levels of Chickens vs. Goats

Those screaming viral videos are the real deal.

Goats can be noisy if they’re unhappy. In my experience, a happy, healthy goat tends to be quieter around the farm (with a few exceptions).

Chickens, on the other hand, will cackle and cluck all day. And, of course, roosters will crow all day long.

Not just in the morning.

If there’s a predator in the mid-morning, in the afternoon, in the middle of the night.

With that being said, I love it. I love the sound of roosters crowing in the morning. And I wouldn’t trade it for the world.

Even if they’re crowing all day long, if I had a neighbor who didn’t appreciate my roos as much as I do, I probably wouldn’t be able to keep him.

Space Needs of Goats vs. Chickens

It won’t surprise that a herd of goats will need more space than a flock of chickens.

On average, a chicken needs about three to five square feet of coop space if they are free-range chickens. On the other hand, if they’re confined to a coop and run, the run will have to accommodate at least 10 sq feet per chicken.

With that being said, the more space you can give to your chicks, the better they will feel (and the more productive they’ll be).

However, when it comes to goats, you’ll need much more space. They’ll need 15 square feet per goat indoors and 25 square feet in their pasture.

While you can keep goats indoors, it’s not very polite. The same goes for chickens.

Both of these animals will thrive on more space than just the minimum for each one.

Another point to consider is that both chickens and goats are both social animals, which means you must keep more than one.

A lonely goat or chicken will be a sad animal. They may become stressed and sick in both cases or fail to thrive.

So when considering space requirements, make sure you’re planning for at least two, of either animal. 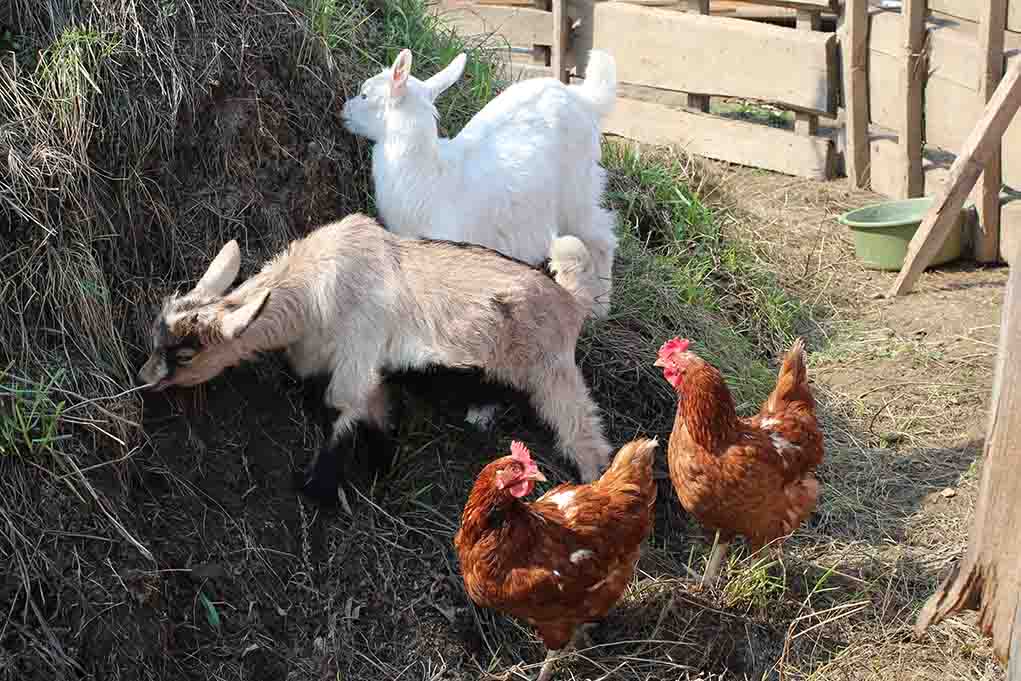 Manure Maintenance for Goats vs. Chickens

I’d be lying if goats and chickens are both easy to care for.

Chickens are by far much easier to maintain, manure-wise. Cleaning goat pens and stalls can be back-breaking work while chicken dung is easy to remove and compost.

This is also true for chickens, but plenty of coops are pre-designed to make this hygienic work quite simple and quick. (especially if you’re keeping a smaller flock).

It’s worth noting that a flock of three chickens makes a LOT less of a mess than a herd of three goats.

When choosing chickens vs. goats, you might wonder which is easier to care for medically.

Chickens are birds, and in general, they’re entirely self-sufficient. On the other hand, goats are ruminants, and their digestive system is very complex.

Furthermore, parasites are extremely common and deadly when it comes to goats. We’ve domesticated them, but we don’t yet have the means to protect them from the environment we’ve put them into.

The US is lacking in its research and medical care when it comes to goats.

Plus, goats are not to be compared with sheep. A goat’s metabolism is much faster, and they require different minerals (and amounts of minerals than sheep).

So, if you want something easy to learn about and easy to care for, you’ll want to start with chickens over goats.

Goat care is complicated, and there’s not a lot of good information on how to keep them alive. The learning curve is steep.

You will probably hear that goats are pretty profitable if selling for meat, or even if you’re planning on starting a dairy.

But remember what I said about that steep learning curve? Goats are expensive if you don’t know how to care for them.

And when I say care for them, I mean:

For many established goat farmers, it’s a long road of trial-and-error and, unfortunately, a lot of loss.

And only the most persistent can make a go of goat-raising. In other words, you have to be ready to go through the wringer and keep on going before you see any real profits.

Be prepared for a roller-coaster ride of ups and downs if you’re set on goats. However, I will say that it’s totally worth it in the end. They’re amazing animals and can turn a profit if cared for correctly.

On the other end of the spectrum, products from your chickens may not bring in big money all at once, but the expense for upkeep and health is much lower for the hobby farmer or new homesteader.

That’s not to say there’s not much to learn about chicken care. There’s just a lot more medical knowledge and resources available than there is for goats.

Can You Keep Chickens With Goats?

If, after reading through the guide, you still can’t decide, you might be wondering if you can keep chickens and goats in the same pen.

While chickens and goats can live together, it’s not always the best idea.

Chickens are foragers, and that means they get into all sorts of things…and then drag them around to places they shouldn’t.

In this situation, I’m referring to diseases and parasites. Cryptosporidiosis, for example, is a protozoan that can be transferred from one species to another, and chickens and goats are both susceptible to it (and so are humans).

Even if certain diseases can’t be contracted by one of the animals, that doesn’t mean it won’t get dragged in on a free-rangers foot, for example.

Most feeds are specifically formulated to meet the nutritional requirements of one specific animal so a goat who happens to love chicken feed probably isn’t getting everything they need (and maybe even some things they shouldn’t eat).

If you must keep them all together, strict biosecurity measures should be put in place, and food must be placed strategically so only those it’s intended to have access to.

Are Chickens or Goats Better?

It’s not easy to choose between goats and chickens. They’re both fun animals to have and produce tasty food.

But there are a few deal-breakers you may have picked up in this article.

Like the amount of space needed, the fact that you can’t keep just one, or even the upkeep of the animals themselves.

When it comes down to it, it will be up to you to decide what’s going to work best for your situation or what you are most motivated to make work.

One thing is for sure; I wouldn’t want to be in your shoes because I could never choose one over the other.

They’re both beautiful animals for the first-time farmer, homesteader, or anyone who wants to get back into farming.