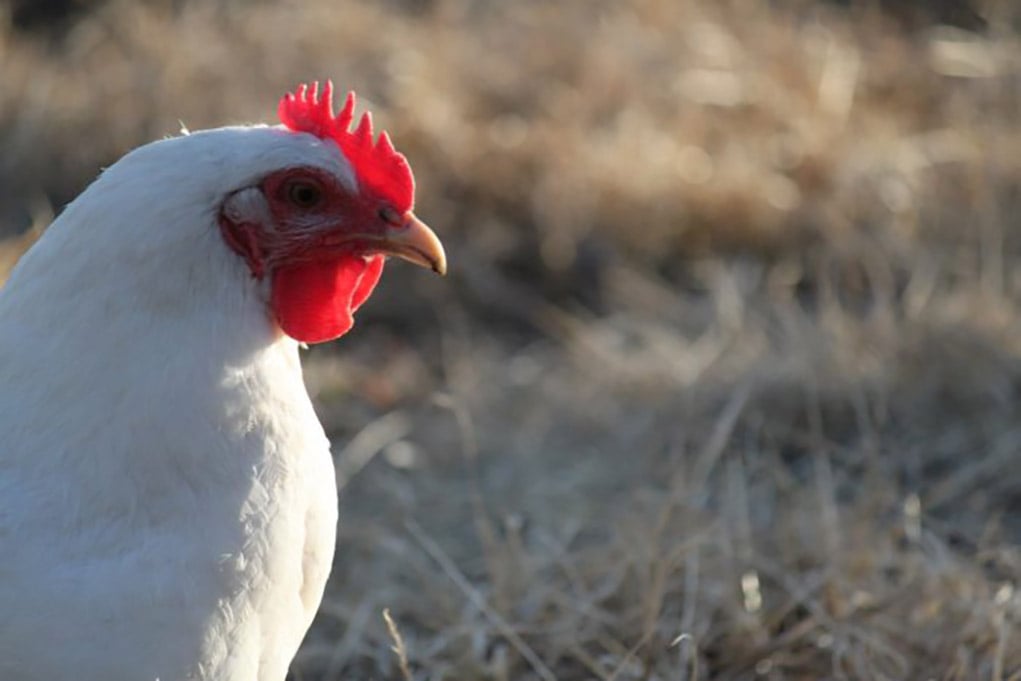 The White Rock chicken is an all-star chicken that will get the job done on the farm, and serve up dinner too. This American breed originated in Massachusetts and was named after Plymouth Rock.

While the White Rock is often referred to as a breed on its own, it is actually a variety of the Plymouth Rock, which can come in different color varieties, including white.

You may even hear other chicken fanciers refer to the White Rock as the White Plymouth Rock.

Think of it as being similar to the naming of the Orpington chicken…there’s Buff Orpingtons, Jubilee Orpington, Splash Orpington…etc.

Regardless of the different terminologies that fly around the name of this breed of chicken, they are not to be drowned out by the chitter-chatter.

The White Plymouth Rock won its way into the hearts of Americans by providing everything needed on the homestead.

Yes, it’s true that the Plymouth Rock can come in Barred, Buff, Silver-Penciled, Columbian, and Blue, but we are taking a close look at the white variety of this versatile breed.

The White Rock is hatched with yellow combs that turn into a bright red at maturity while their legs remain yellow. Once combs start changing, fresh eggs on a daily basis won’t be too far behind.

The White Rock is a breathtakingly, blinding, bright white. This is the chicken that lived on great-great grandma’s homestead and helped put breakfast on the table.

These are the chickens in the rustic old farmhouse paintings. They’ve been around, doing the chicken chores for a long time.

The White Rock tends to be one of the fluffier chickens in the flock, especially in winter. Their soft fluffy feathers make them perfect for cold climates. 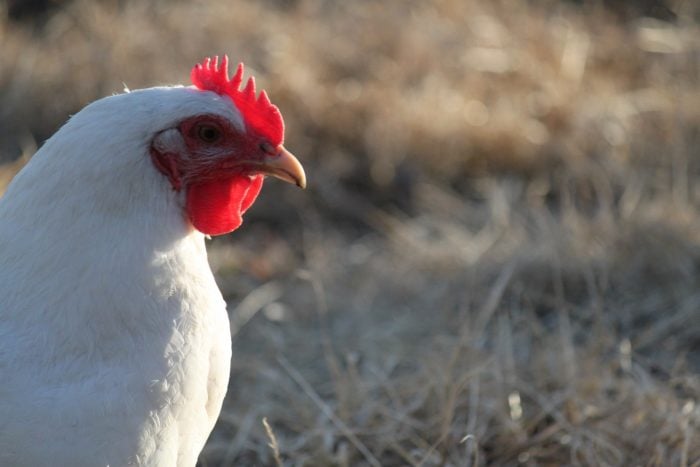 The White Rock is considered a standard-sized chicken but is actually on the larger size. At maturity, they weigh in at around 8 lbs—perfect for the dinner table. Their fluffy feathers tend to make them appear larger than they actually are, but despite this rouse, they are still the perfect size for the holiday dinner family.

If the Cornish Cross is the King of the meat chickens, the White Rock takes the thrown for the egg layers.

This utility breed can pump out nearly an egg a day if they are happy and healthy. If you love the warm hue of a large brown egg, this is your hen.

In fact, if you already purchase brown eggs from your local grocery, you can bet that they came from a White Rock.

Along with the Rhode Island Red, the Rock is at the top of the egg-laying spectrum in terms of productivity laying well over 200 eggs per year.

The Meat of The White Rock Chicken

The White Rock is best known for her egg production, she is also a great chicken to keep around for the dinner table as well.

Since she is a larger breed, the yield of meat is just the right amount. The Rock is definitely considered a dual-purpose breed and was bred for this purpose.

Bred to withstand the northern climates, the White Rock chicken is extremely hardy in winter weather.

Those fluffy feathers are perfect insulation when the temps drop during cold spells. However, this breed does sport a single comb, which makes the chicken more prone to frostbite.

Those who live in climates that reach subzero temps can combat frostbite by keeping their chickens in well-insulated coops and by applying Vaseline to their combs to help insulate them.

Since the White Rock was built to withstand the cold climate of Massachusetts, hens will not slow down in egg production throughout the winter as long as they are comfortable and have everything they need to thrive.

The White Rock chicken is another forager to add to the backyard flock, as they were bred to be the homesteader’s chicken.

They will happily forage for the majority of their protein, if it is available, and come to the coop for whatever they feel they might need after a long day’s work.

One drawback of the beautiful snow-white bird is its inability to hide from predators like other breeds of chicken.

Surprisingly, the white chicken is actually at a greater risk of being spotted and picked off by a predator than those they have barring or darker feathers that help them to remain camouflaged.

With that being said, the White Rock still is an intelligent chicken and knows to keep an eye out for aerial and ground predators. 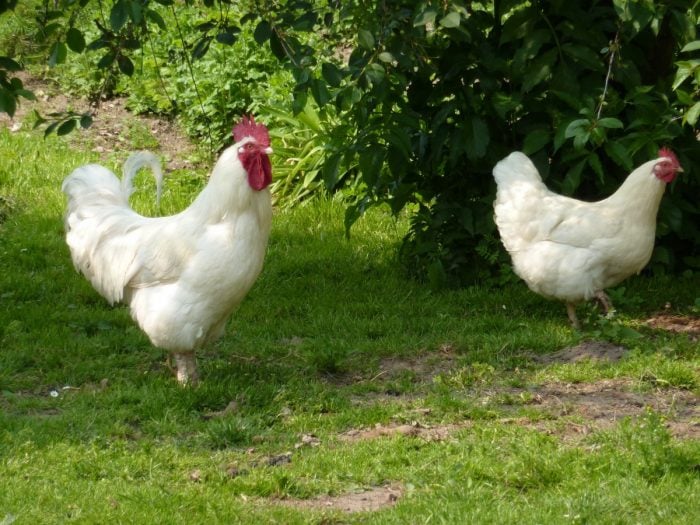 The Temperament of The White Rock

Hardy, handy, and resourceful…and it doesn’t stop there. The White Rock, in its beautifully fluffy white feathers, is also a friendly hen to have.

She is considered to be docile friendly, and not afraid to visit with you when you are out and about doing your chores every morning.

Like most friendly, calm birds, this laid-back temperament puts them at risk of being picked on and bullied by the more aggressive breeds.

So, keep a watchful eye on your flock when you add White Rocks to make sure they thrive amongst any flock-mates that have a tendency to assert themselves more aggressively than this sweet breed.

There is a proper way to introduce new chicken to your flock.

While the White Rock does tend to be a good mother, she does not go broody as frequently as other homesteading breeds, such as the Orpington chicken.

But when she does she is very attentive to her clutch. She will fiercely protect her chicks if left to raise them on her own.

The White Rock (or White Plymouth Rock) chicken is a wonderful dual-purpose chicken with a meaningful American history.

For a short time, this historical breed was considered “threatened” on the Livestock Conservatory’s Conservation Priority List.

But has since entered into recovery thanks to dedicated breeders who enjoy the perks of raising such a flexible, friendly chicken.

For new chicken owners, this hardy chicken will provide all the benefits of a well-rounded chicken, in a short amount of time, ensuring an enjoyable journey through raising your first flock of chickens. 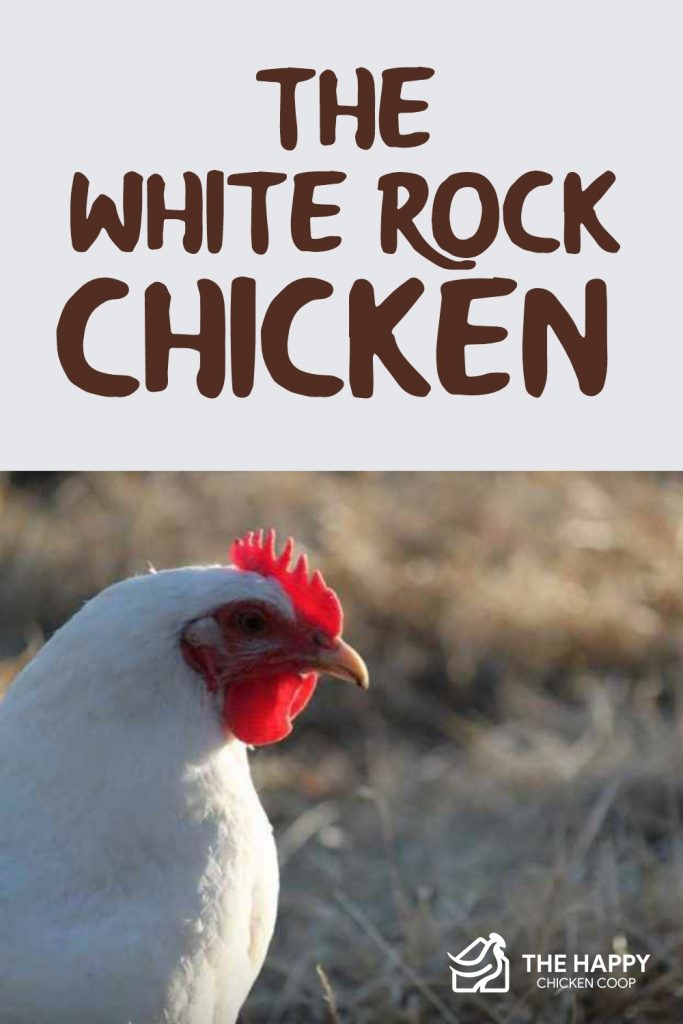