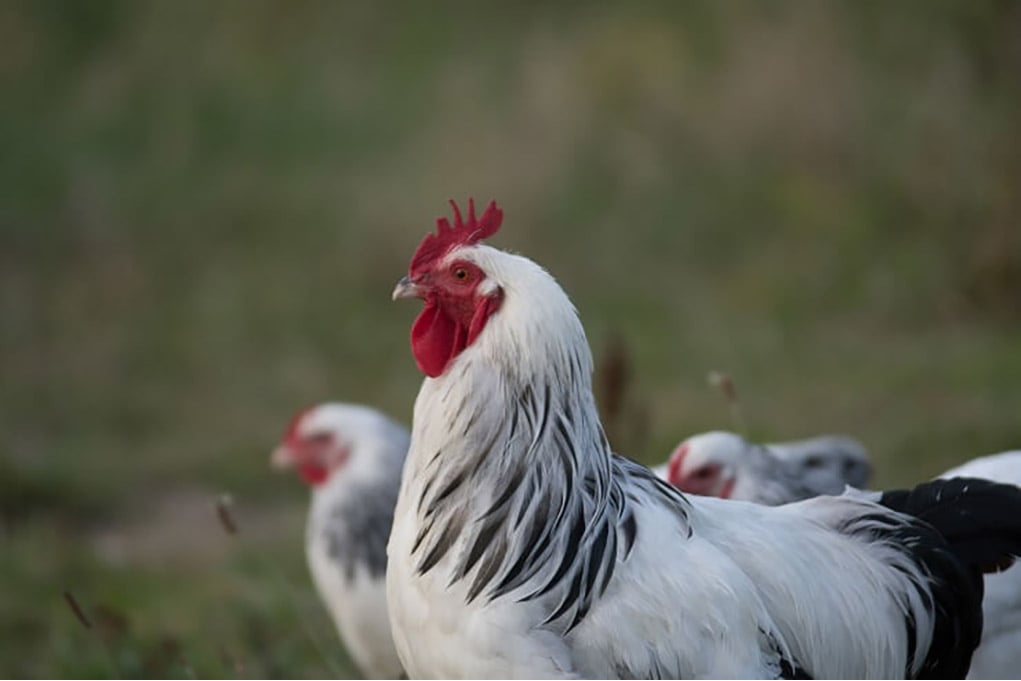 Delaware chickens are a relatively new breed of chicken to the chicken world.

In the 1940s it was all set to become the broiler industry ‘superstar’, but things went awry and Delaware languished and fell into obscurity.

They are only around today thanks to a few dedicated individuals who kept and raised this breed.

In this article, we explore the history of this lovely bird. We will also persuade you to give this dual purpose hen a chance in your flock. It really is a special bird.

The creation of the Delaware chicken was in many ways happenstance.

It all started with the Rhode Island Red.

As the Rhode Island, Red breed was being refined for better eggs and meat, several white ‘sports’ were created.

In the 1940s a fellow called George Ellis saw potential in these birds and started working with them. He wanted a bird that would maintain good egg production but increase meat production too.

Also, a white bird would be exactly what the industry was looking for since any remaining pin feathers would not look unsightly after plucking.

As with their parent birds they were selected for fast feathering and rapid growth rate so that they were competitive in the broiler industry.

He worked with them for several years and his original birds were called Indian Rivers. It was also called the Ohio Beauty for a short time but was changed to Delaware.

His work with the breed was a huge success.

The Indian Rivers were the most popular bird in the Mid-East.

Their popularity lasted for around 15-20 years before they were sidelined by the even faster-growing Cornish Rock cross.

Since Delaware had originally been bred for the broiler industry, few small farms or homesteads kept these birds and so began a steady decline in their popularity.

A few dedicated souls kept the breed going, but in 2009 the American Livestock Breed Conservancy had listed it as critical status. 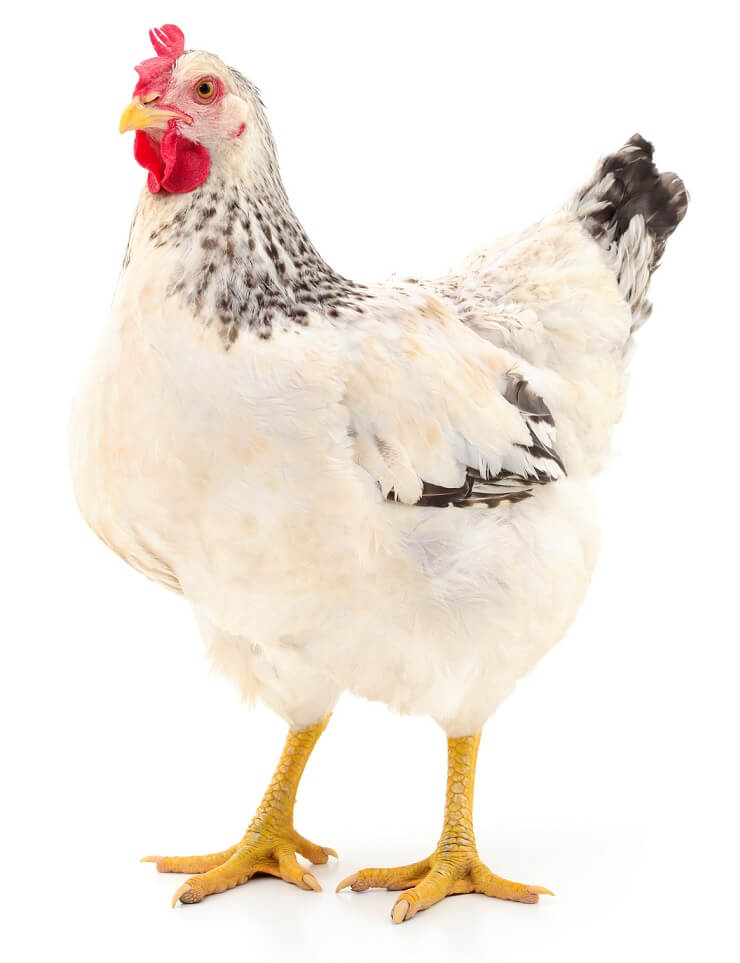 Delaware is a medium-sized, dual-purpose bird with a long, broad, and deep body. You should expect the boys to weigh around 7-8lbs and the ladies around 6lb.

There is also a bantam variety and these weigh in at 32oz for the boys and 28oz for the girls.

They are all white/silver with some black barring on the hackles, wings, and tail. Although you may hear people say it is a Columbian pattern it is not so.

The Columbian pattern has solid black feathers not barred, so similar but not the real thing.

The rosters are especially handsome with the neck and tail barring.

Their comb should have 5 points and will be red as are the wattles and ear lobes. Combs are quite large so Vaseline may be in order if you live in a cold area.

The eyes are a reddish bay color and the beak is a reddish horn color.
Skin and legs are yellow, the legs are clean and each foot should have four toes.

They were admitted to the American Poultry Association standard in 1952. There is only one variety – white with black barring on their hackles, tail, and occasionally wings and body.

Unfortunately they never really made an impact anywhere but the US as their stardom was short-lived, so no other breed standards exist.

Delawares have been described as calm, friendly, curious, and intelligent – all of which I would agree with.

It has also been described as quite – the ones I had were not overly noisy, but they certainly were not quiet, they love to talk!

They can be assertive but definitely aren’t as assertive as Rhode Island Reds. They are always curious as to what you are doing – mine loved to help in the garden and no earthworm or beetle was safe!

Whilst not known for being ‘lap’ chickens, it really does depend on the individual bird; some will happily sit on your lap and go to sleep.

My favorite Delaware hen (Deirdre) would love to sneak into my jacket while I was wearing it, and sit there and sleep! 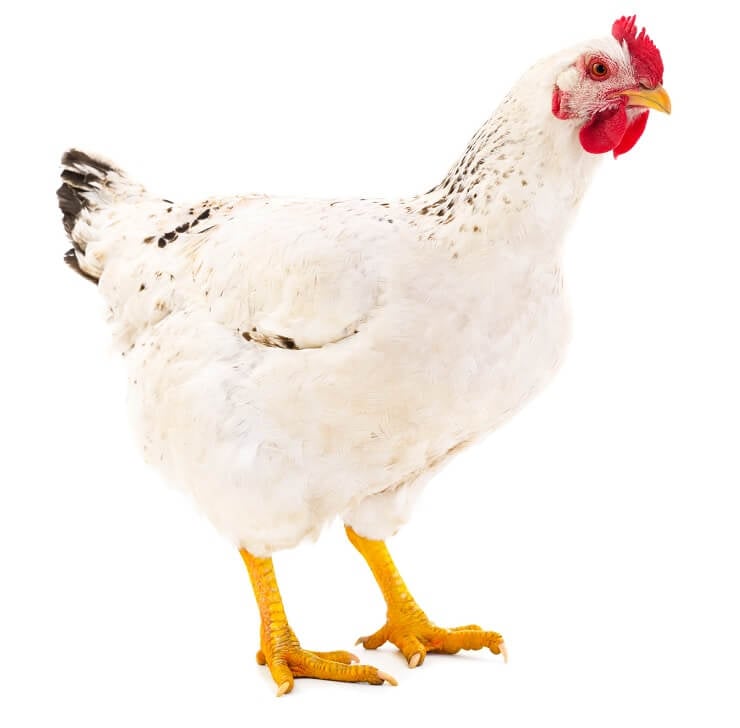 Delawares are excellent layers of four large/jumbo brown eggs per week. They really are not very interested in being broody, so if you want to hatch some yourself, you will need either a broody or an incubator.

You may be fortunate and get a hen that seems to want to brood, but be prepared and have your incubator on standby.

Much as the New Hampshire and Barred Rock breeds were used to produce Delaware.

Delaware can be used with certain other breeds to produce sex-linked chicks.

Health Issues of The Delaware Chicken

Apart from the usual parasites (which should be expected), they are very healthy birds.

The only thing you need to pay attention to is their comb. The combs can be subject to frostbite so a little Vaseline may be called for.

In order to understand the need for a chicken like Delaware, we have to understand a little of what was happening at the time they were created.

During the early 1940s, the UK and most of Europe were at war with Germany.

Although the US did not enter the war until 1941, they did supply materials including food to the UK and allies.

In addition to this, during the post-war years (the 1940s and 1950s) supermarkets really gained in popularity.

Farmers could not keep up with the day-to-day running of their farms let alone the work involved in raising, selling, packing, and transporting livestock. These problems were to be solved by the rise of the agricultural industry.

Large warehouses for chicken production were built by enterprising new companies such as Perdue.

The supply and life of chickens were now forever changed; the small farms could not hope to compete with this large-scale operation and so turned to other products to keep the country fed.

The Second World War changed the face of farming forever to the benefit of mankind, but certainly not for the animals involved.

Is The Delaware Chicken Right For You?

Delaware is well suited for the small urban/suburban homesteads. It lays plentiful eggs and can be a family meal in a short space of time.

They are people-oriented and very friendly, they love to chat with you and let you know how their day is going. If you have children, they are said to be very good with them also and some will tolerate being picked up and cuddled, but this is definitely an individual thing.

This chicken loves to free range in the yard, picking off any bugs or other tasty treats along the way; they can even help you with your gardening.

Despite being white, I never lost any of my girls to predation – they are very watchful and predator savvy.

They are a low maintenance breed which makes them suitable for beginners or a 4H project.

Unfortunately, it is said they are difficult to breed to ‘standard’ and many folks have to use the double mating system to get good quality birds.

They usually do well in exhibitions and shows since they remain rare bird.

Thankfully, they are now on the ‘watch’ list for the ALBC due to renewed interest in some of the older chicken breeds.

Delaware is incredibly well suited to small farms and homesteads. They lay very well and are quick to mature, which makes them an economical table bird too.

When the time comes to replace some of my flock here, it will be Delawares that will fill the spaces as I found them to be very low in maintenance but extremely personable.

What about you, do you have any in your flock? Let us know in the comments section below…

READ NEXT: ISA Brown Chicken Breed: All You Need To Know 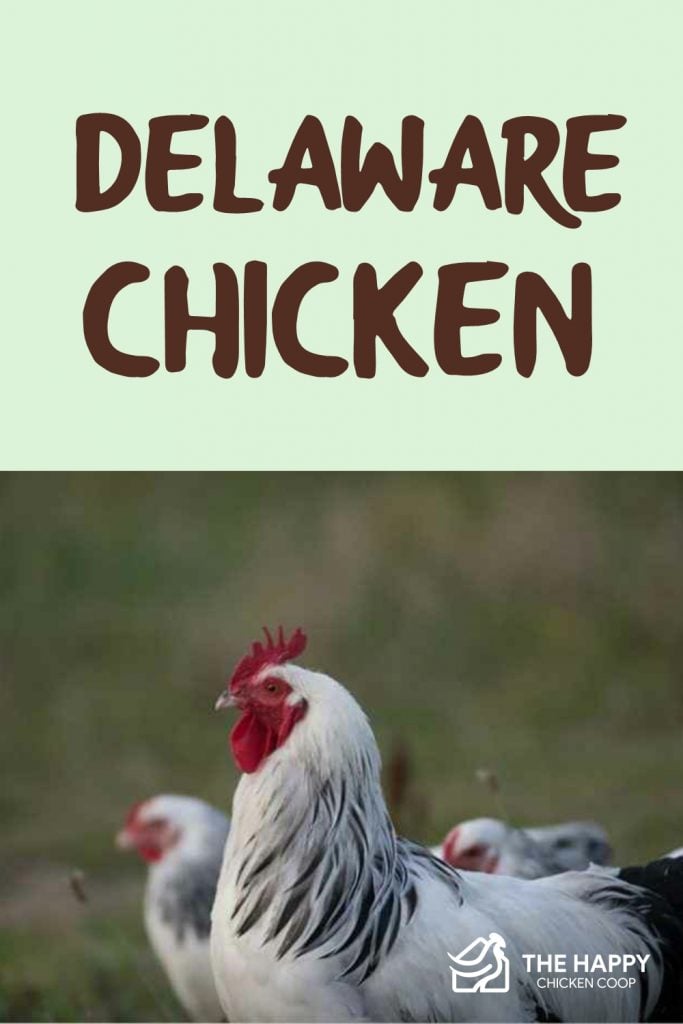