How to Feed Meat Chickens 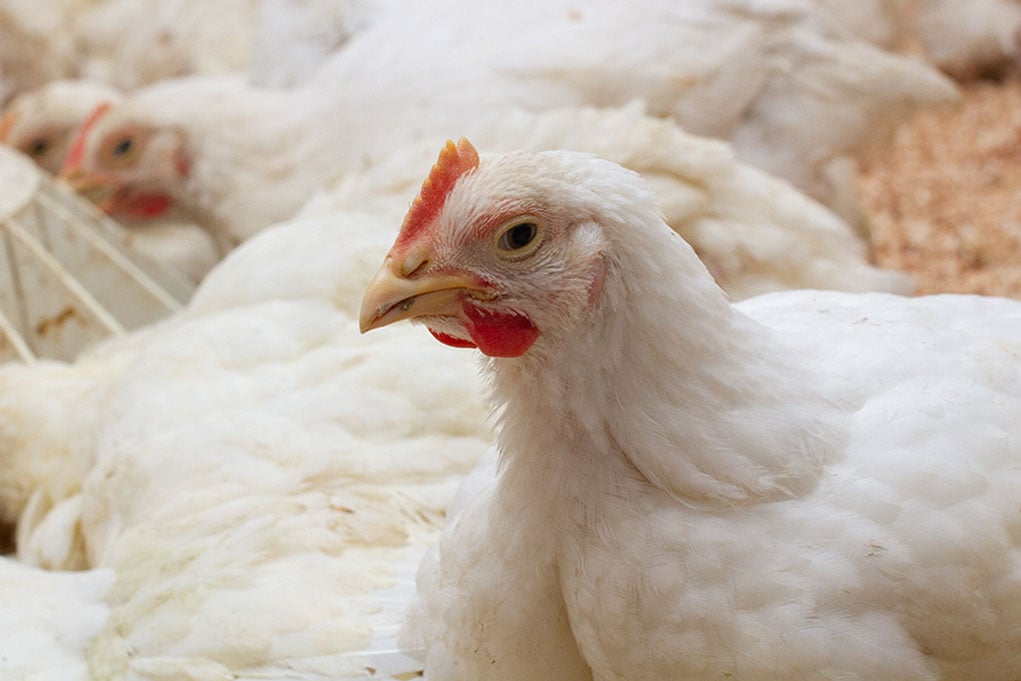 We feed meat chickens is a little different than feeding a typical layer hen. Chickens bred to be efficient meat birds grow much faster than chickens intended to produce eggs, meaning they have different nutritional requirements.

A Cornish Cross, for example, is ready for processing in about 8-9 weeks, while a heritage breed like the Jersey Giant won’t have enough meat on its carcass until about 6 months.

For this article, we’ll focus on how to feed Cornish Cross broilers properly. 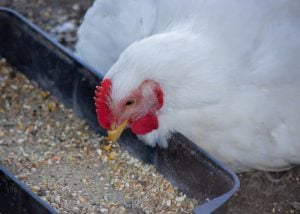 You Can Feed Meat Chickens Incorrectly

Unfortunately, some new chicken owners unknowingly purchase Cornish Crosses as chicks from the local supply store, not knowing they weren’t intended to live a long life.

These birds may accidentally be overfed and die because their organs fail due to rapid weight gain. Sometimes, these birds grow so fast that their legs cannot handle the weight of their body, causing leg injuries.

On the other hand, if underfed, broilers may not receive enough protein to sustain themselves. They may die prematurely.

Luckily, this guide will help chicken owners, new to meat birds, make a plan to keep their birds healthy as they grow. 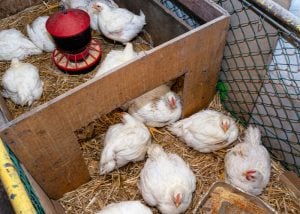 How to Feed Meat Chickens for Appropriate Growth Rate

Because broilers are fast-growing, large-bodied birds, it’s important to follow a feed plan for chickens intended for the butcher at 8-9 weeks. 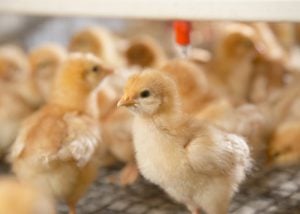 During the first week of a meat chicken’s life, it should be fed medicated starter feed, which is the same type of feed given to chicks that are intended as layers.

Starter feed is high in protein content, giving young chicks a healthy start when they grow the fastest.

Ensure that your chicks get a feed with at least a 20% protein content during weeks 1-3.

Medicated feed is important during these first few weeks because it helps prevent death amongst chicks due to coccidia.

Coccidia is a protozoan that can be picked up through feces (most chicks and chickens have this protozoan in their bodies already).

But when chicks are young, their immune system isn’t strong enough to combat coccidia, and they can easily die.

Once a chick is about 3 weeks old, it will most likely survive contraction of coccidia.

Feeding Schedule During Week One

During week one, your chickens should have access to fresh food and water 24/7. At this point, there is no reason to limit the amount of feed your chicks are getting. 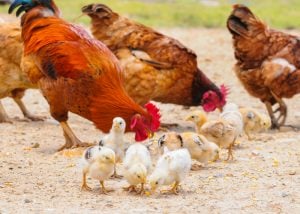 Continue to feed medicated chick starter feed during the second and third weeks of the chicks’ lives.

At the beginning of week two, it’s time to switch to a feeding schedule for your meat birds to prevent overeating (and growing too quickly).

When chicks are this age, you’re focusing your efforts on preventing loss due to heart and leg issues that arise from an exceedingly fast growth rate.

Try your best to feed your chickens during daylight hours because chickens are creatures of habit and prefer to roost and sleep during the night.

If you start noticing your broilers running out of feed before the twelve hours are up, you can add more.

At this time, it’s also important to watch your chickens for signs of exhaustion or inability to move.

If chickens are overfed from here on out, they may not be able to exert enough energy to get to the waterer, feed themselves, and take care of themselves in general.

Additionally, weak, overweight chickens risk getting pecked, contracting infections, getting trampled, or being eaten by other chickens.

At the first sign of immobility or fatigue, reduce the amount of feed you’re giving by about 5% until the flock appears more lively.

It’s important to note that broilers, in general, aren’t as lively as other breeds of chickens, so you should expect some laziness. 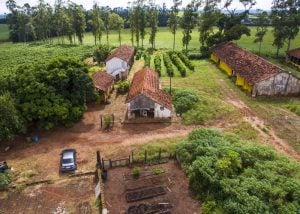 Once your chicks are four weeks old, it’s time to switch to an unmedicated grower. Finisher feed with a protein content between 16% and 18%.

Your chickens will continue to grow for the next 5+ weeks. But the lower protein content in their feed will protect them from growing too fast.

As you finish your chickens, continue to maintain a 12-hours-on, 12-hours-off feeding. Use this schedule all the way up until 24 hours before processing day.

Additionally, your chickens no longer need medicated feed because they’ll be able to tolerate small bouts of coccidia. After all, you’ve set them up for success.

Likely, they’ve already battled it as a chick on medicated feed, and now they have an immune system that will fight infections better. 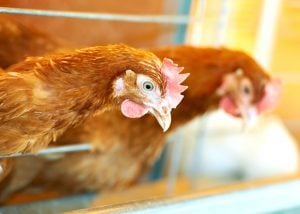 On our farm, we prefer to pull back on grower feed for the final week before processing and, instead, give our chickens regular layer feed because it has a lower protein content.

We specifically do this if we have a flock of straight-run chickens because hens tend to grow slower than the roosters in the flock.

This practice allows the hens to grow another week and keeps the roosters from growing too much or becoming tough.

The Day Before Butchering

The day before we process our chickens, we remove food from the chicken tractors.

Since we process our own chickens, we know what it’s like to dress a bird with a full belly (and crop) of food–messy.

It makes clean processing easier if the chickens haven’t eaten in about 24 hours.

If you follow this feeding plan for meat chickens, you’ll set yourself up for success with your broilers. Providing medicated feed early on, feed on a schedule, and monitor your chickens’ behavior. This way, you’ll prevent loss and end up with a tender chicken for the dinner table.

READ NEXT: Chicken Processing: Know When To Slaughter Your Chickens 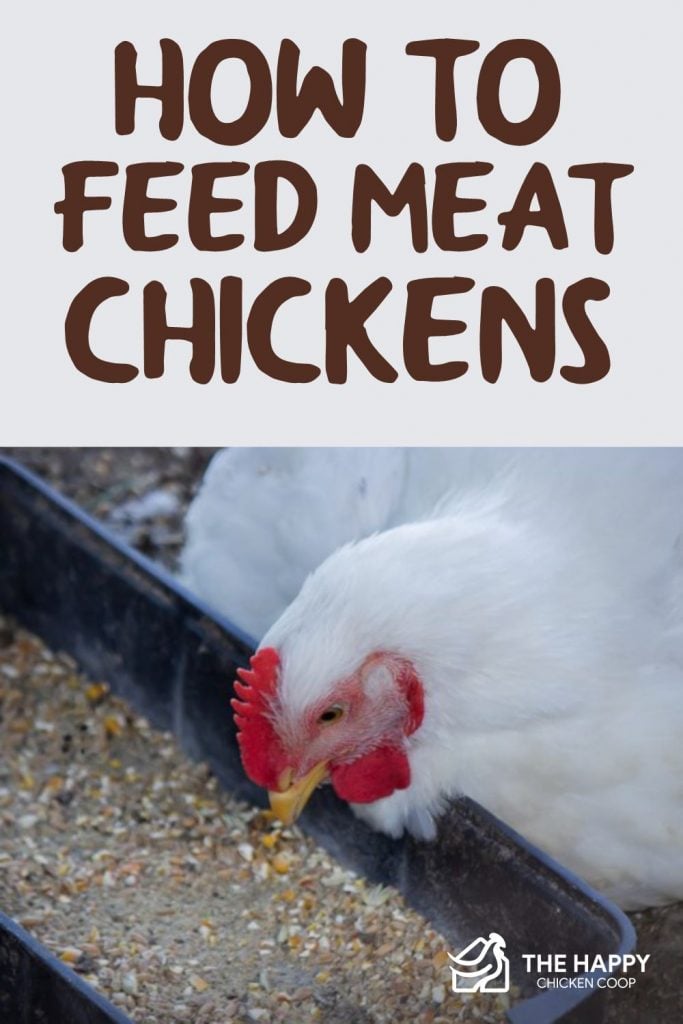 One thought on “How to Feed Meat Chickens”